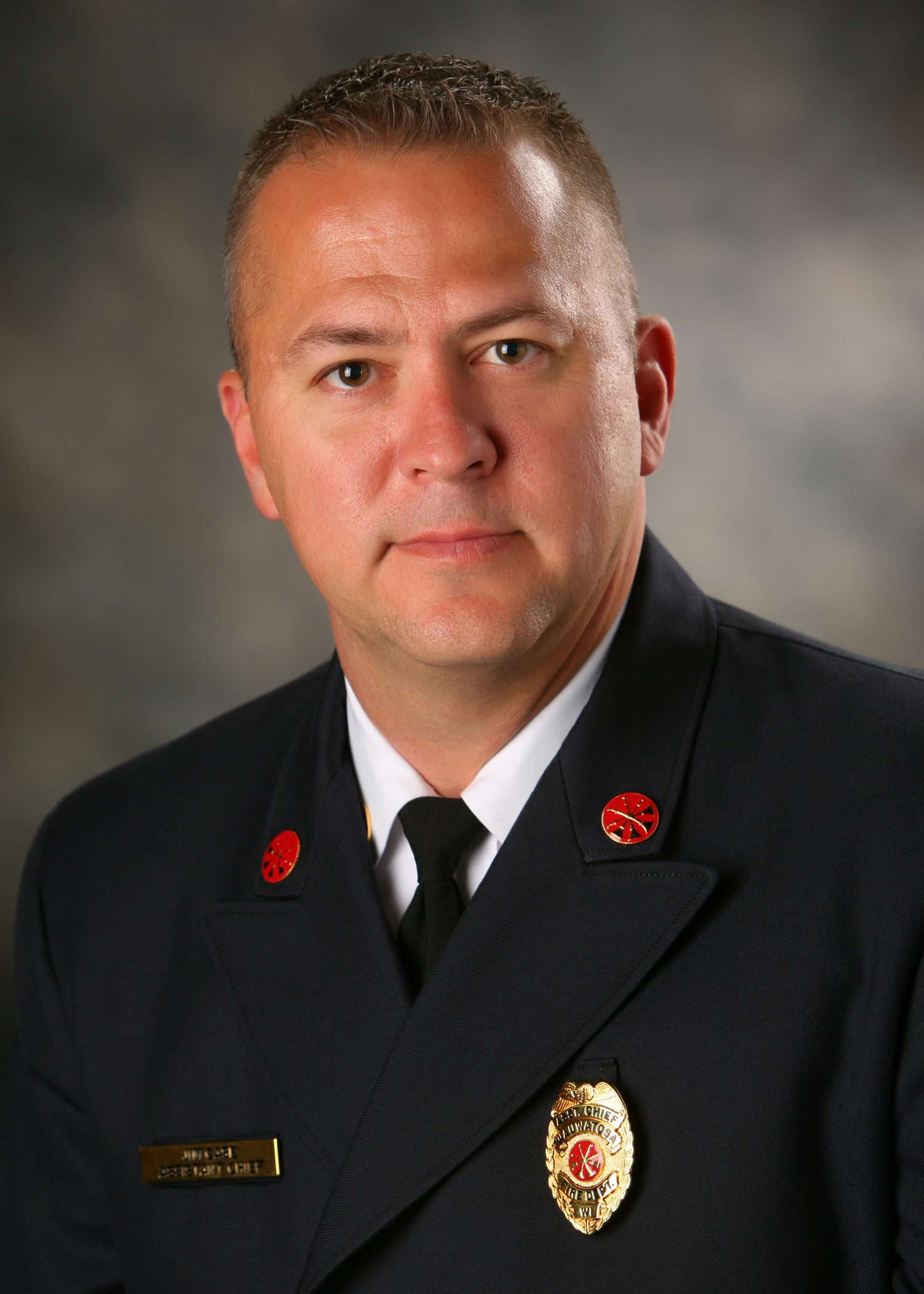 Chief Jim Case has been involved with the fire service since 1990 and has been a member of the Wauwatosa Fire Department since 2001. He previously served as the Assistant Chief of Administration where he was responsible for management of the Fire Department’s budget and the Community Risk Reduction Bureau. He is also an active member State of Wisconsin Disaster Medical Response Team (DMAT). Chief Case has deployed with DMAT to numerous disasters including Hurricane Sandy in 2011 and Hurricane Harvey in 2017.

Chief Case’s fire service career began as a volunteer with the Marquette County Sheriff’s Department where he was a member of the local Search & Rescue (SAR) Team. He also served in a similar capacity with the Pennington County, South Dakota SAR. During his time with the SAR teams, Chief Case gained significant experience in specialized rescue techniques such as rope and trench rescue.

Prior to joining WFD, Chief Case served nine years of active duty with the U.S. Air Force as a personnel readiness technician achieving the rank of Staff Sergeant in the 28th Bomb Wing’s Personnel Readiness Unit. In this role he was responsible for the deployment and management of over 5,000 personnel, often in combat zones. His service included numerous deployments to Iraq, Turkey, and Haiti. After leaving the military and returning to Wisconsin, he joined the Muskego Volunteer Fire Company where, he was promoted multiple times, eventually reaching the rank of Assistant Chief. Assistant Chief Scott Erke has served the City of Wauwatosa since 1999. He has held the positions of Firefighter, Paramedic, Technical Rescue Team Leader, Shift Commander and Deputy Chief of Training. He also has been a member and held the position of President of the Milwaukee County Training Officers. Assistant Chief Erke has developed several new training programs and re-organized the Wauwatosa Training Academy to facilitate an aggressive, well rounded training for new hires and current members. Assistant Chief Erke is currently responsible for Fire Operations, Safety, Training, Suppression Personnel.

Assistant Chief Erke has been involved in the fire service since 1986, starting as a volunteer in Waukesha County and then moving to the City of Oak Creek as a Firefighter. Assistant Chief Erke worked as a Fire Instructor at Waukesha County Technical College from 1999 through 2015. He instructed FFI, FFII, driver operator/pumper and aerial, FOI and specialty contract suppression classes for acquired structure/live fire trainings. 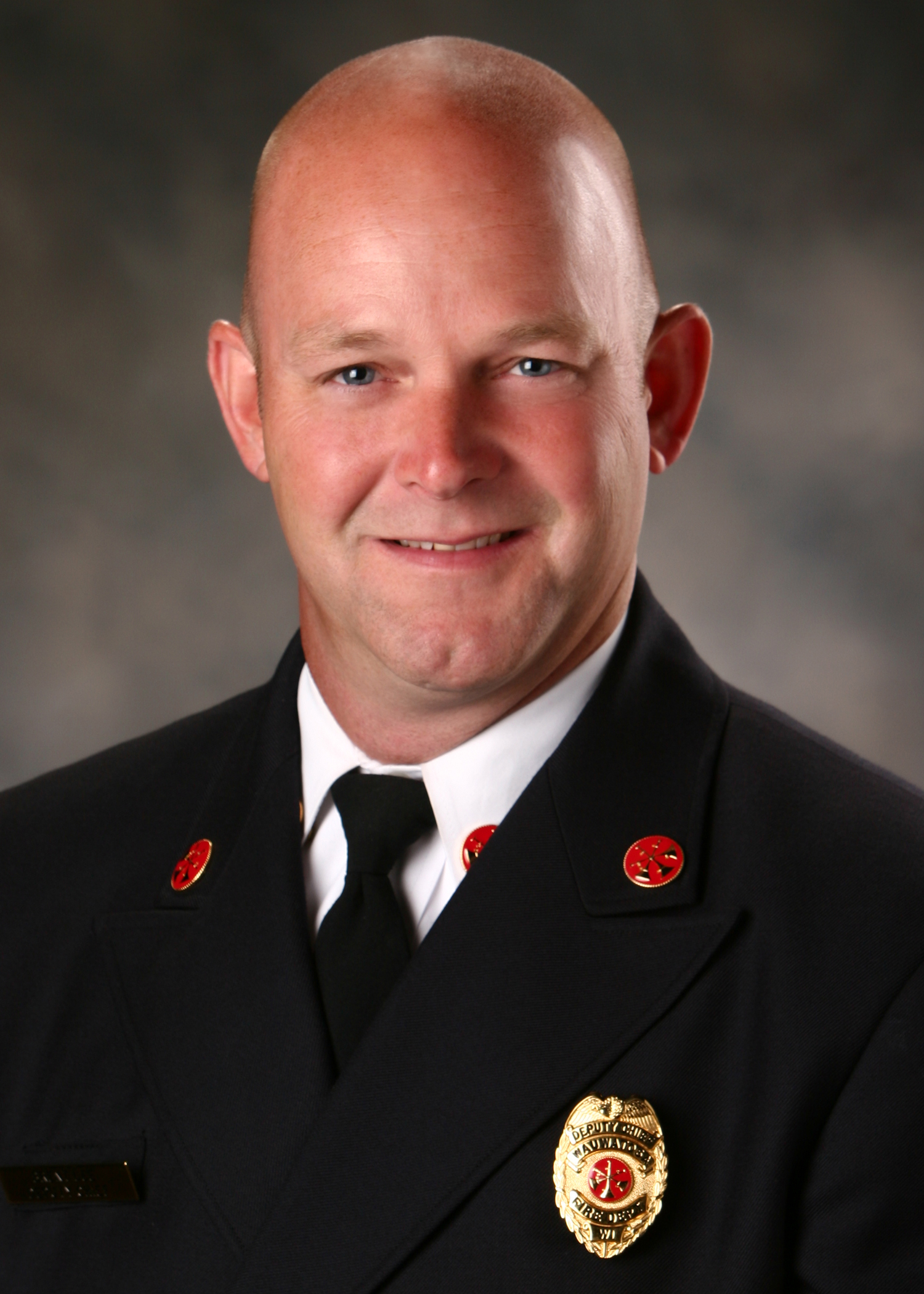 Assistant Chief Brent Lee started his career in 1991 with the Milwaukee Fire Department where he worked as a firefighter for six years. In 1997, he was hired by the Wauwatosa Fire Department and has held the positions of Firefighter/EMT, Lieutenant, Technical Rescue Team Leader, Deputy Fire Marshal and Deputy Chief.

Assistant Chief Lee has an Associate Degree in Fire Science. He holds certifications in Emergency Medical Technician, Fire Instructor, Fire Officer, Driver/Operator, Firefighter I, II, and III and Safety Officer. He is also a member of the Wisconsin State Fire Chiefs Association.

Assistant Chief Lee manages daily administration activities, oversees the Community Risk Reduction Bureau, and takes the role of Incident Commander at significant emergencies. He is responsible for managing Telestaff, which is the computerization of all staffing decision including selection of time off and the creation of daily assignments.

Battalion Chief Stacey Lueptow started her fire service career in 1994. She was hired by the Wauwatosa Fire Department in 1998. She has held the positions of Firefighter/EMT, Paramedic, Hazmat Team Leader, and Lieutenant.

Battalion Chief Lueptow has a Bachelor's Degree in education. She holds certifications in Firefighter I and II, Driver/Operator, Fire Officer, Fire Instructor, EMS Instructor II, and Safety Officer. She is pursuing a masters in Public Administration. 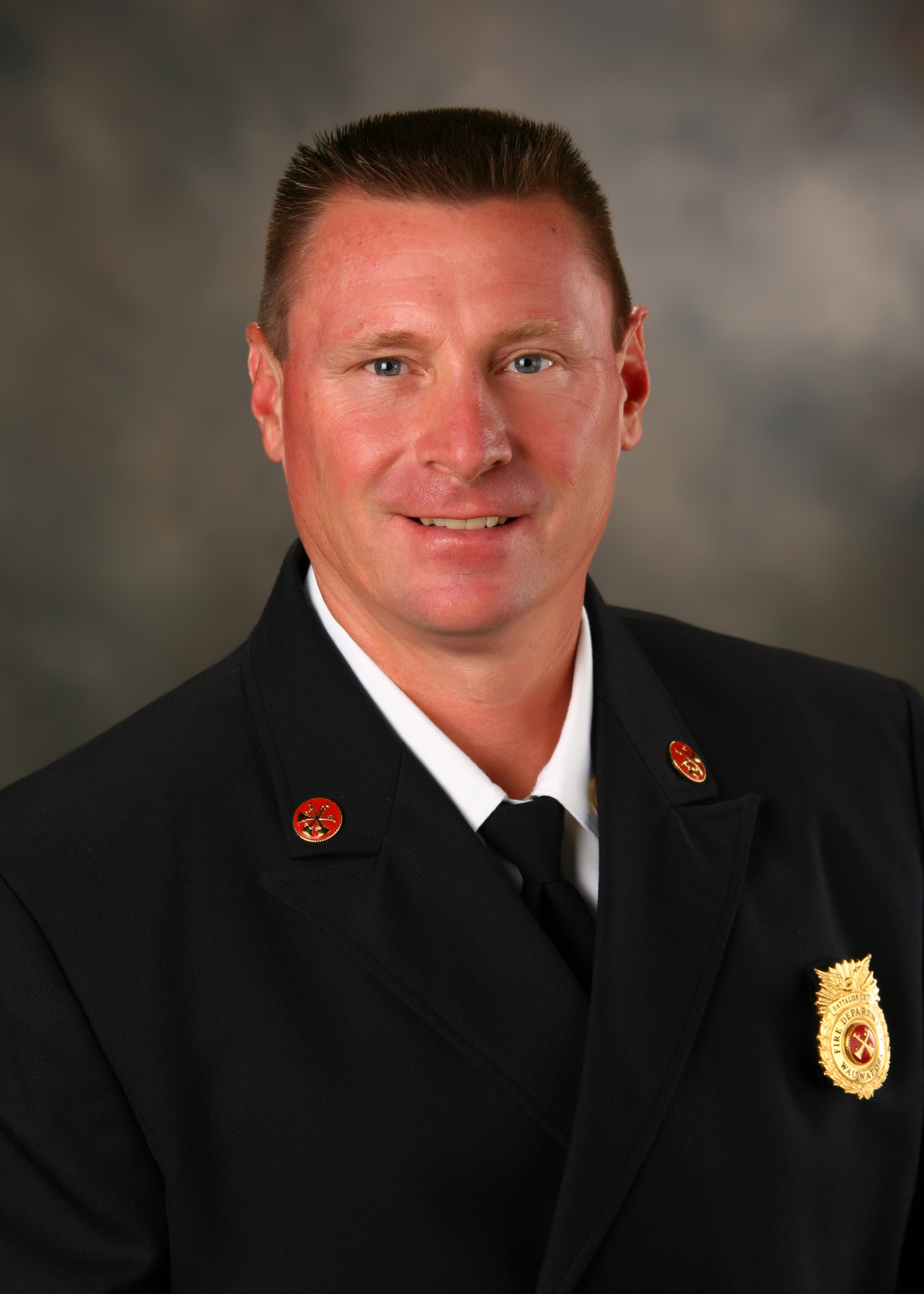 Battalion Chief Robert Randow began his career in the fire service in 1988 with the City of St. Francis. He was hired by the Wauwatosa Fire Department in 1990. He started out as a Firefighter/EMT. He was promoted to Lieutenant in 1999, Captain in 2012, and Battalion Chief in 2016.

Battalion Chief Randow has an Associate Degree in Fire Science. He holds certifications in Firefighter I, II, and III, Driver/Operator, Fire Officer, and Fire Instructor. He is also licensed National Registry EMT. 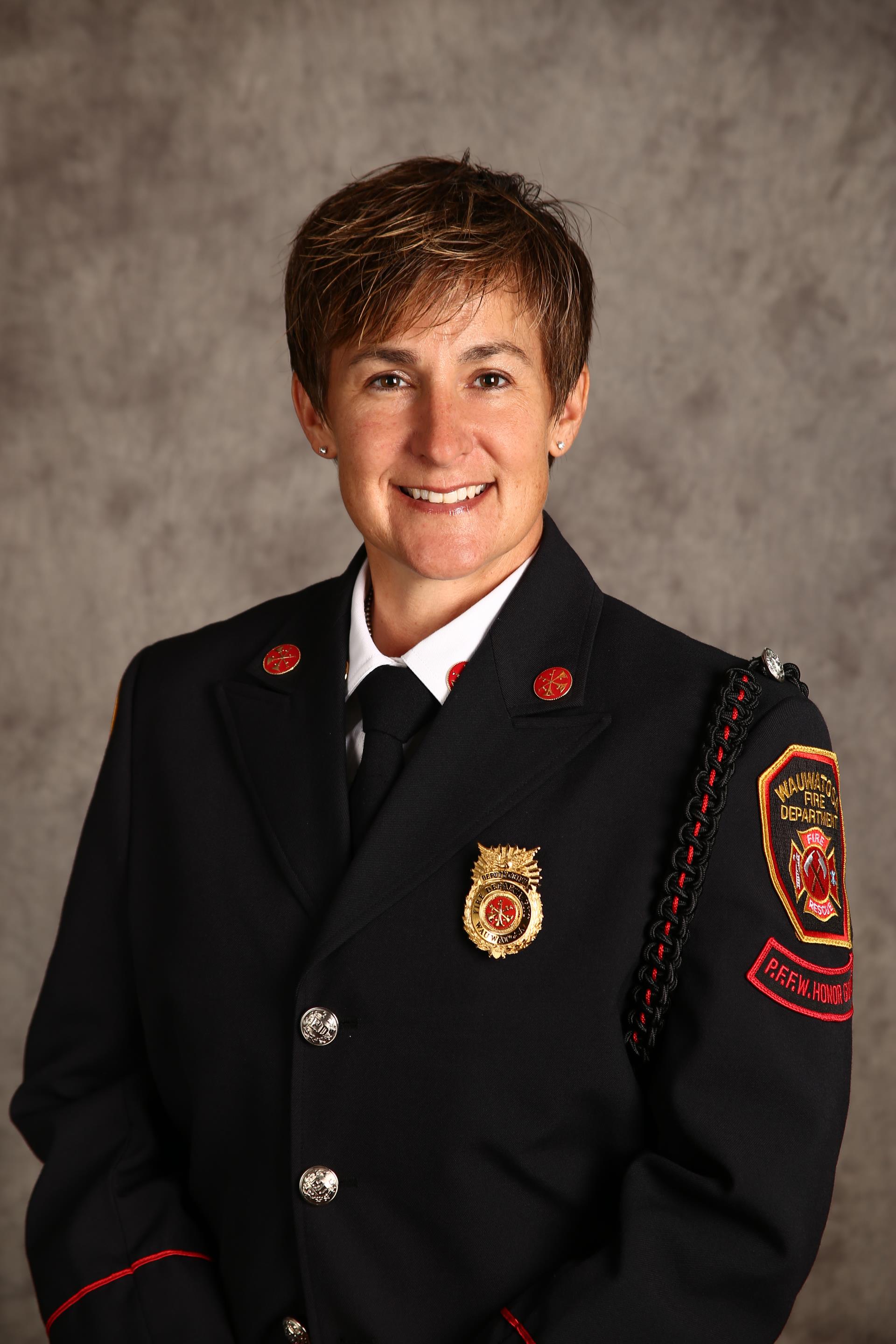 Battalion Chief Barbara Kadrich started her fire service career in 1995 and was hired by the Wauwatosa Fire Department in 1998. She has held the positions of Firefighter/EMT, Paramedic, Special Rescue Team Leader, Haz-Mat Team Leader, Honor Guard Commander, and Lieutenant. 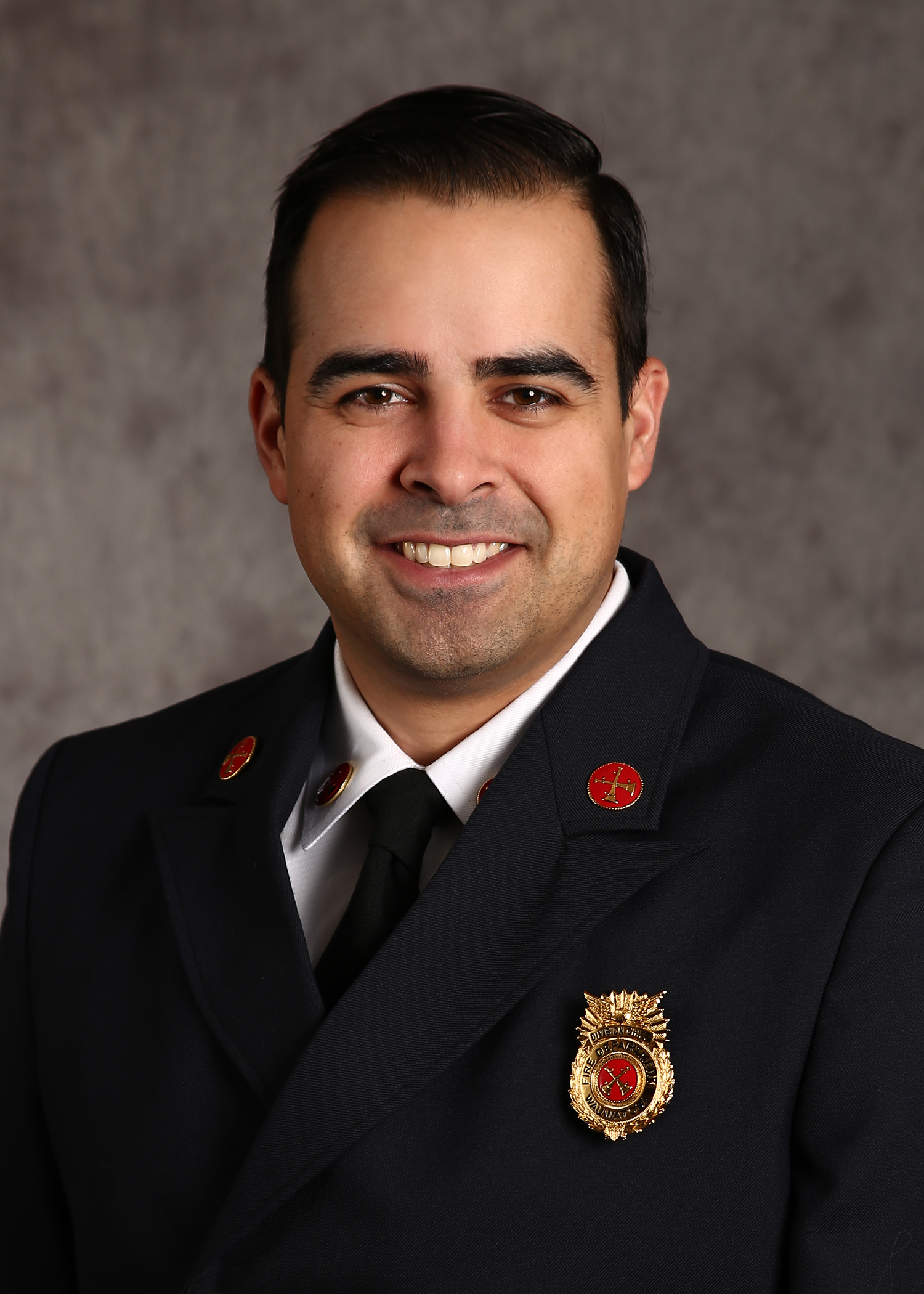 Division Chief Chris Sandoval started his career in the fire service with the Mequon Fire Department where he worked as a Lieutenant and Paramedic for 5 years. He was hired by the Wauwatosa Fire Department in 2012. He has held the positions of Firefighter/Paramedic, TEMS Team Leader, Motor Pump Operator, and Lieutenant.

Division Chief Sandoval is currently the EMS Manager and Training Coordinator for all Wauwatosa EMTs and Paramedics. He also assists in incident command roles at significant emergencies. He is currently the Vice-President of the Milwaukee County Training Officers and an EMS Instructor at Milwaukee Area Technical College. 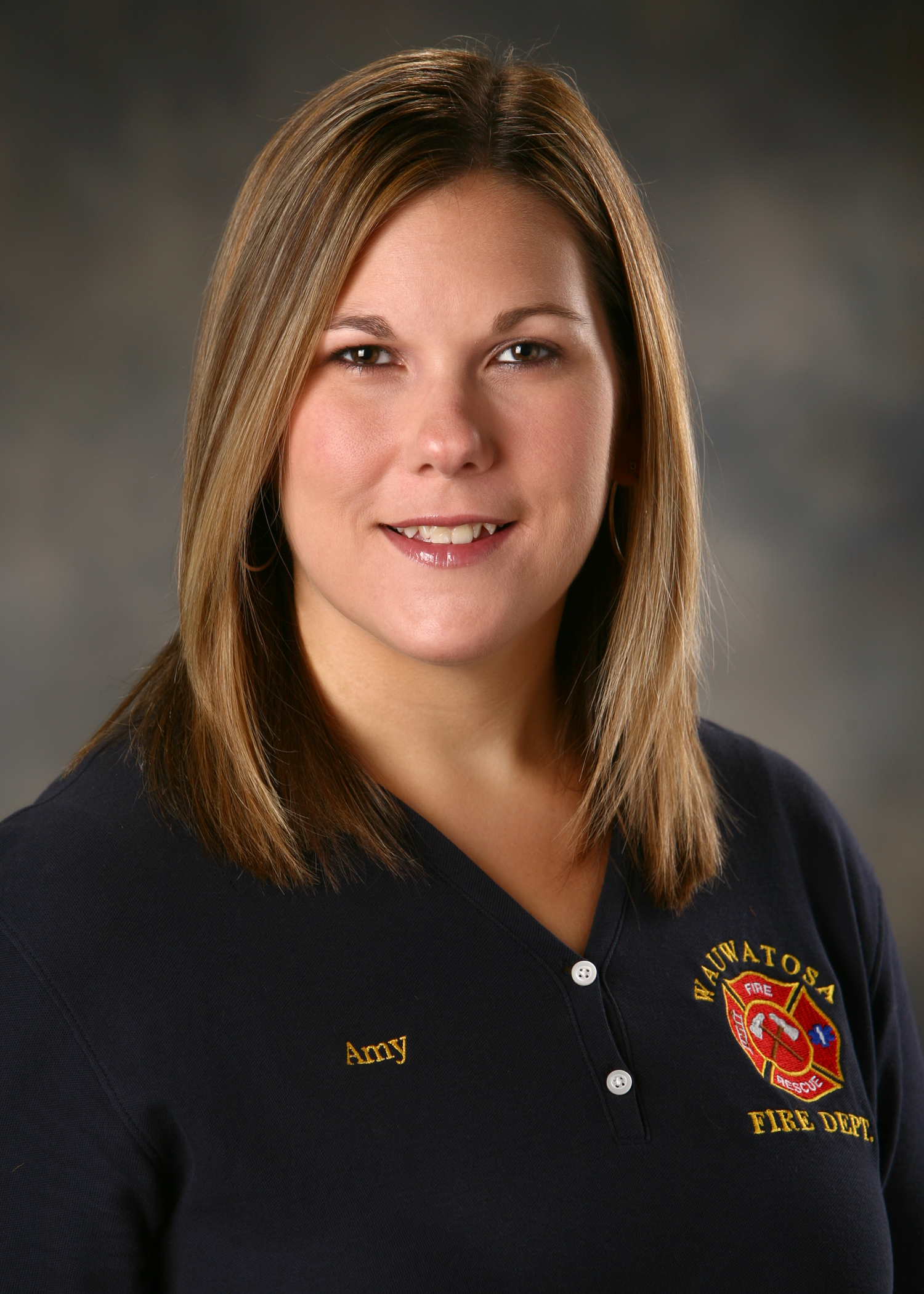 Office Manager Amy Barron began her career with the City of Wauwatosa in 2000, where she worked in the Buildings & Safety Division as a permit clerk. In 2004 she moved to the Wauwatosa Fire Department as the Fire Education Coordinator & Fire Prevention Office Assistant. Office Manager Barron was promoted to her current position in 2011.

Office Manager Barron has an Associate Degree as an Administrative Assistant from Milwaukee Area Technical College. She is proficient in numerous computer programs, including Microsoft Office. Her primary responsibilities include payroll, accounts payable and receivable, and purchasing. She assists with the hiring process, budget, website, and any other duties the Chief Staff may assign. Office Manager Barron plays a large role in making sure the day to day operations of the Wauwatosa Fire Department run smoothly.

On top of Office Manager Barron's everyday duties with the Wauwatosa Fire Department, she is a Wellness Champion for the City of Wauwatosa, on the Board of Directors for the Focus Credit Union, and is the Vice President of the Wisconsin Fire Service Administrative Association. 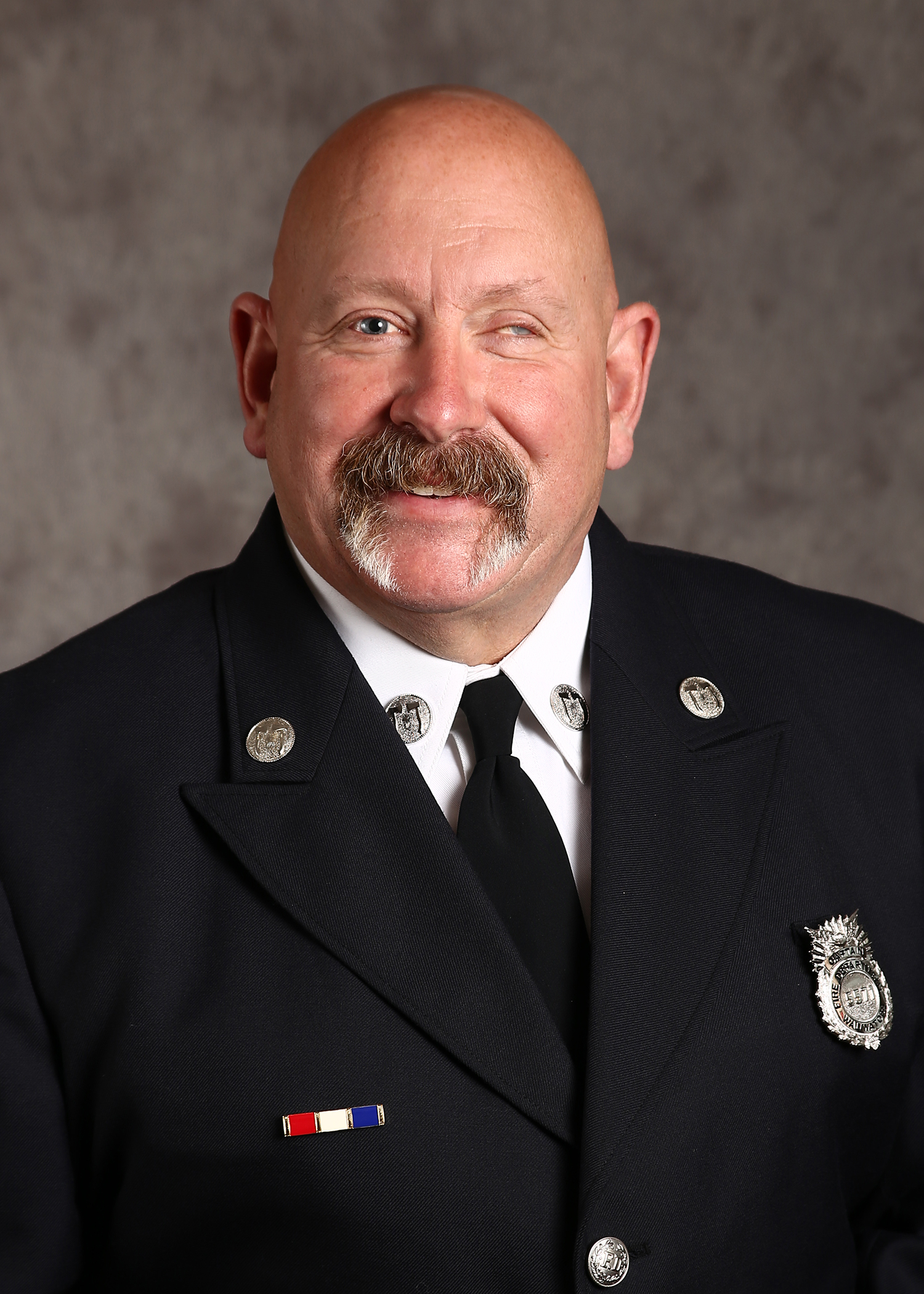 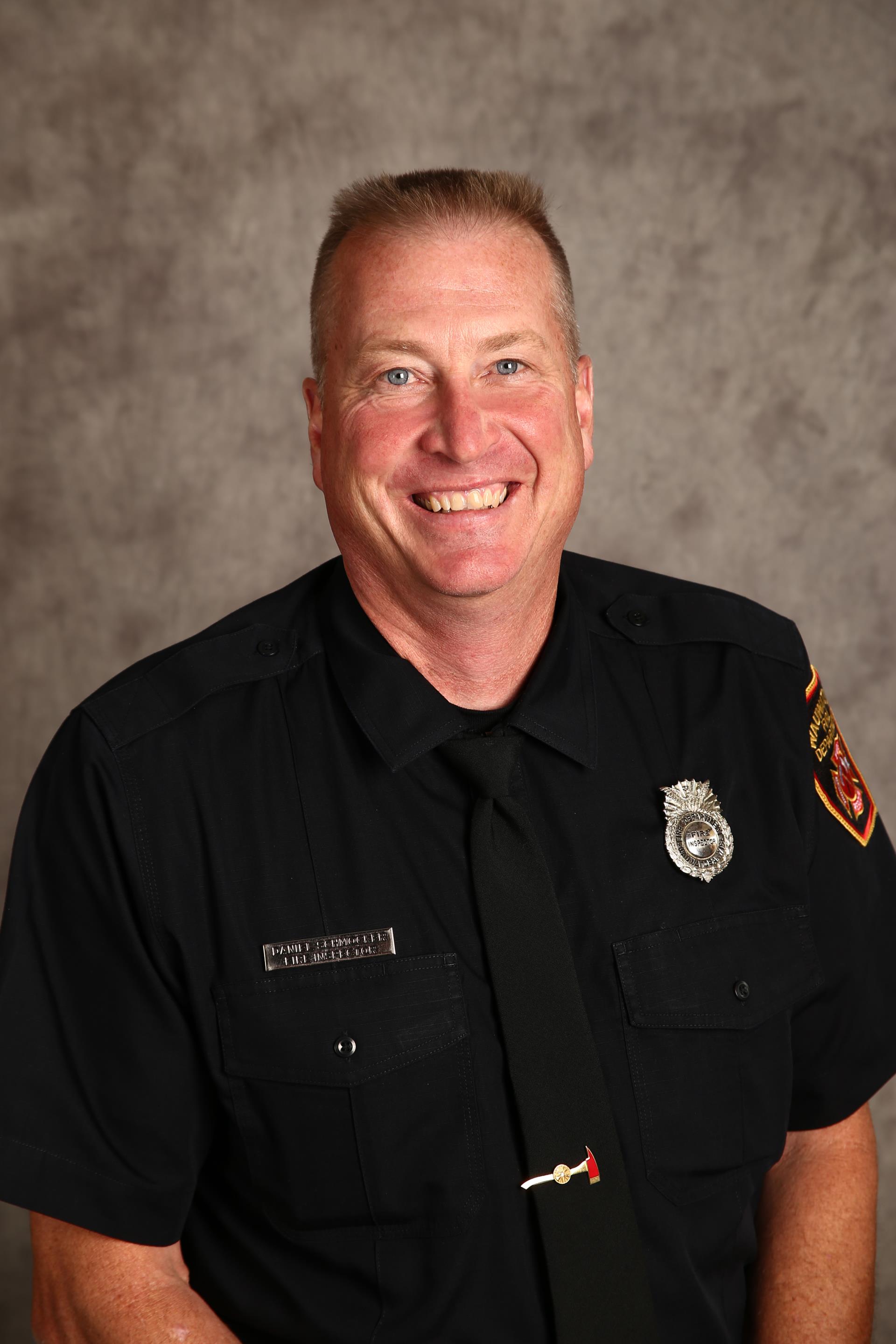 Fire Inspector Dan Schmocker strives to promote a safe and progressive environment to live, work, and socialize. He has a knack for educating people while enforcing fire/building codes in a fair thorough manner. 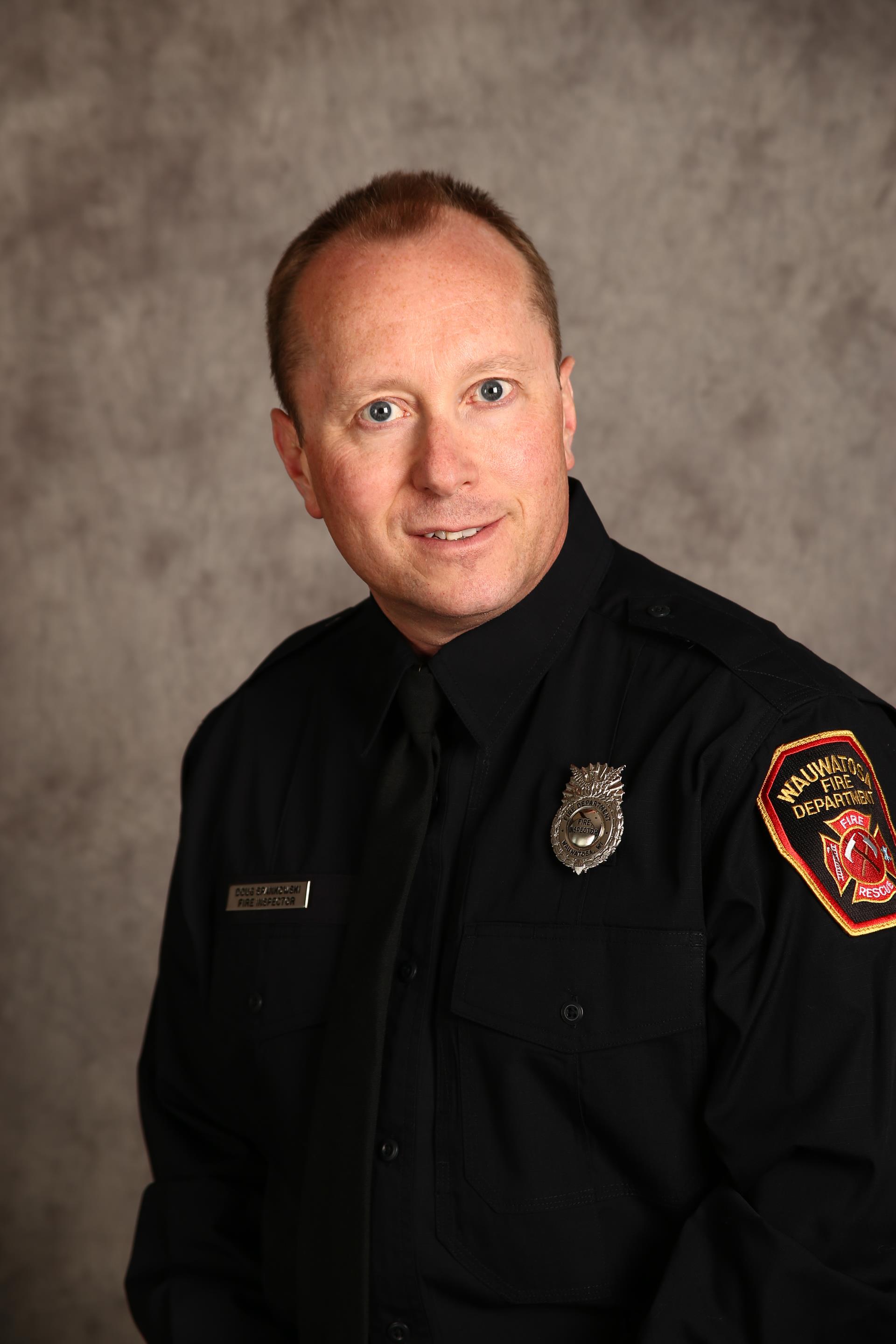 Fire Inspector Doug Spankowski has served the Wauwatosa Fire Department since 2014. Prior to that, he was with the Wauwatosa Water Department as a Plant Operator. He has an extensive background in both industrial mechanical and electrical fields from nearly two decades working in manufacturing.

Fire Inspector Spankowski has an Associate's Degree in Electrical Engineering from Milwaukee Area Technical College and holds a State of Wisconsin Journeyman card in Machine Repair/Industrial Maintenance. He is a licensed Commercial Building Inspector and a NFPA certified Plan Examiner. He also has certifications in Fire Inspector I, and Arson Investigation. Fire Education Coordinator Lori Murphy has worked for the City of Wauwatosa since 2000. She has served the Wauwatosa Fire Department since 2011.

Fire Education Coordinator Murphy has a desire to reach as many people as possible with prevention lessons. Whether it's through teaching fire safety to children, or fall prevention and safety to senior citizens. She strives to educate our community with various programs including Car Seat Installation & Safety Checks, the Fire Safety House, Hands only CPR and Home Safety Assessments. On top of all of these duties, she is also responsible for assisting the Community Risk Reduction Bureau with processing violation notices and issuing permits.

Fire Education Coordinator Murphy has attended classes at the National Fire Academy in Emmitsburg, Maryland, to further her education and learn new information to implement into her job. Meeting people from other departments around the country and sharing ideas has provided her with great information to improve her own programs.

Fire Education Coordinator Murphy is a member of the Wisconsin State Fire Inspectors Association and is a National Child Passenger Safety Certified Technician. 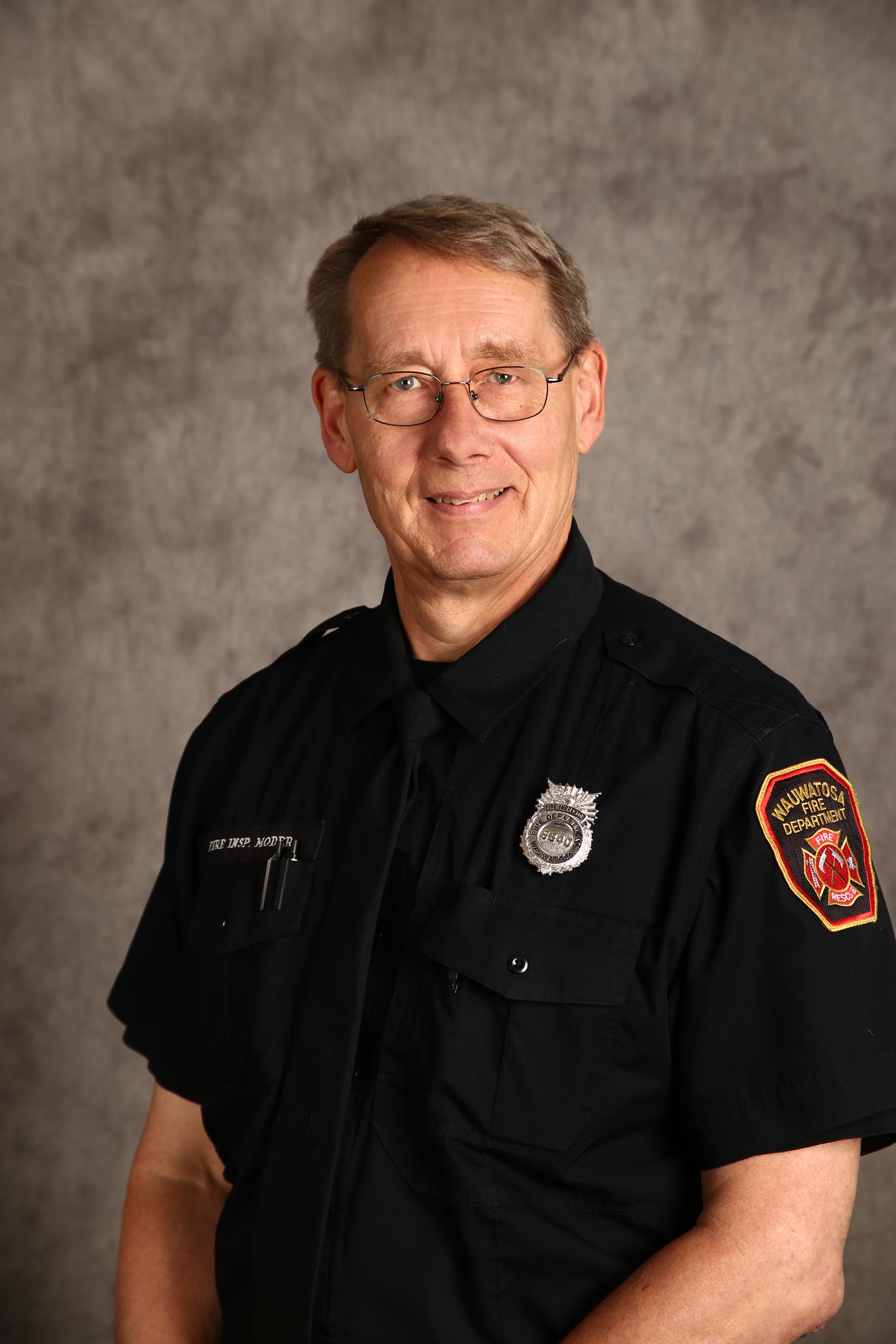 Fire Inspector Moder has held positions of Fire Lieutenant and Lieutenant Paramedic.  He has been a member of the Haz-Mat Team and worked in the Bureau of Technical Services.

As a member of the Wauwatosa Fire Department's Community Risk Reduction Bureau, Fire Inspector Moder is responsible for preforming annual fire inspections for businesses through out the community. 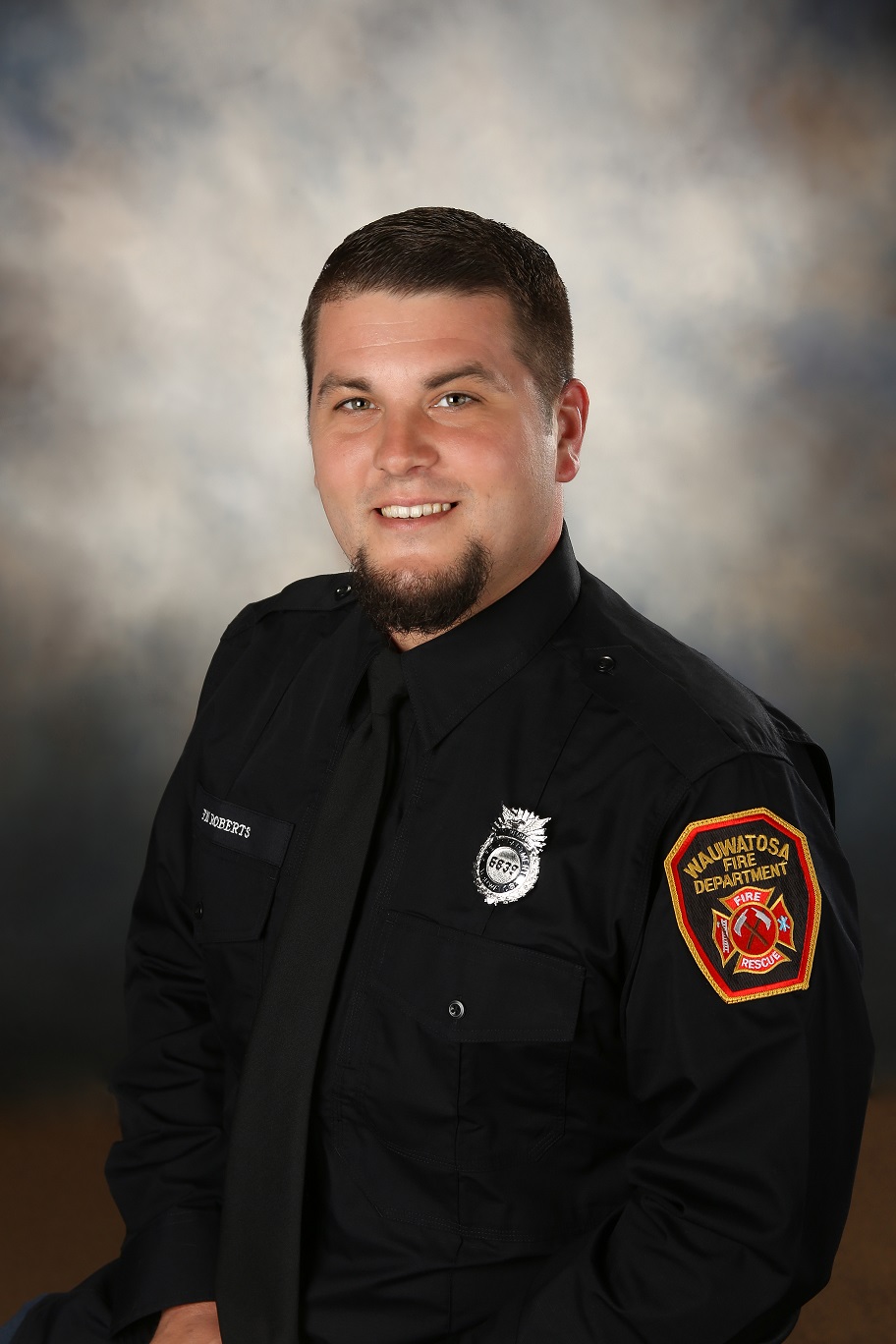 Fire Mechanic Joe Roberts has been in the Auto Mechanics Industry since 2002. He has specialized in heavy equipment and diesel repair since 2007.

Fire Mechanic Roberts is an active member of the Wisconsin Association of Emergency Vehicle Technicians and boast EVT certifications among countless hours of specialized training. He strives to stay in tune with the technological advancements of today's Fire Apparatus. Most of all, he is proud to help the Wauwatosa Fire Department serve the community.